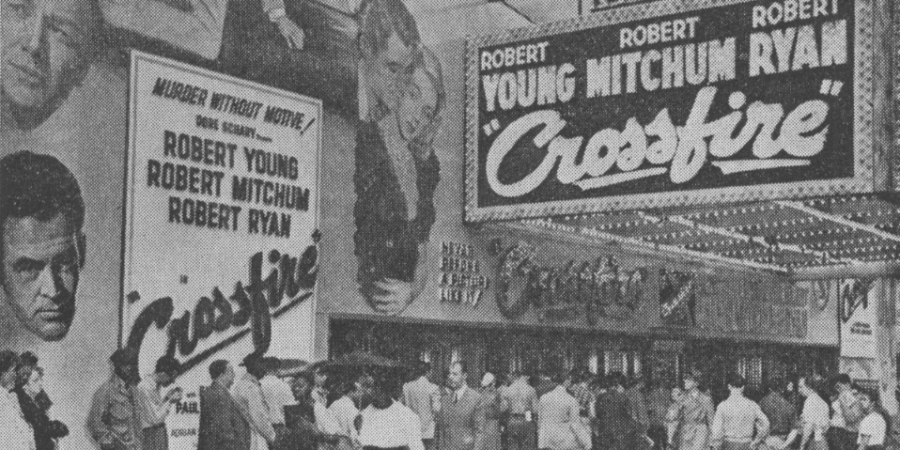 Seventy years ago today, Crossfire – Hollywood’s first postwar film to tackle the problem of anti-Semitism in America – premiered at the Rivoli Theatre in New York City in a “blaze of glory.” The Radio Flash, RKO studio’s in-house exhibitor newsletter, crowed over eager movie-goers forming lines around the block, standees in the back of the house, and an opening day gross the highest ever for an RKO picture at the Rivoli.

Set in Washington, D.C. just after the end of the war, Crossfire is a classic manhunt thriller in which an innocent and troubled soldier is implicated in a disturbing murder (the ubiquitous frame-up that forms the existential backdrop to so many noir films). Crossfire has all the visual hallmarks of 1940s noir: innovative camera angles, high-contrast lighting, a series of disorienting flashbacks. It has a stellar cast: Robert Young as the world-weary police detective who realizes that intolerance is the cause of the murder that seemed without motive; Gloria Grahame as the tough-but-tender B-girl who provides the alibi for the innocent (but adulterous) soldier; Robert Mitchum as the street-smart soldier who rallies the band of brothers to exonerate their fellow GI; Sam Levene as the menschy Jewish murder victim; and Robert Ryan in a chilling tour-de-force as the insinuating and bullying anti-Semite. Crossfire has moments of pedantry but overall it is a powerful and politically explosive film.

Despite RKO’s best efforts to sell Crossfire as a conventional murder mystery with an “unusual” theme, film critics across the nation quickly outed the film as an expose of the violent consequences of American anti-Semitism, hailing the film as a “first” for Hollywood and applauding the filmmakers’ courage in bringing a “taboo topic” out into the open.

Crossfire went on to become one of RKO’s top money-makers in 1947 and was nominated for five Academy Awards: Best Picture, Best Screenplay, Best Director, Best Supporting Actor for Robert Ryan, and Best Actress for Gloria Grahame.

The film also brought producer Adrian Scott and director Edward Dmytryk to the attention of the House Un-American Activities Committee. By the end of 1947, they would be charged with contempt of Congress, fired from their jobs at RKO, and blacklisted in the film industry.

And the following March another powerful anti-anti-Semitism film, Gentleman’s Agreement, would win three Oscars, including Best Picture and Best Director for Elia Kazan (who would later become a friendly witness before HUAC).

Believe me, I’ve tried really hard to move on from this film, this intellectual project, the blacklist novel I began working on even as I was revising my dissertation for publication. And I thought I was doing a pretty good job. After writing myself into a dead end on the novel a few years ago, I put it in a drawer. I told myself it was OK to let it go. I mean, I’d already devoted the better part of two decades and produced two weighty tomes on Crossfire. Surely I’d earned the right to move on to something else?

And I did. I had other projects in the works. I was doing my tiny house thing, noodling a memoir on chronic illness, making fun art with crayons and a blowtorch, even sketching out some ideas for a new, different novel. Something feminist. Maybe something speculative. I was moving on.

Then Donald J. Trump was elected President. And that changed everything for me. The political apathy and cynicism I had wallowed in over the past three decades of ping pong presidents – pouf, buh bye! Hello, it can happen here.

Like many others, I began marching, calling, petition-signing, but mostly I spent a lot of time thinking about how we had gotten ourselves into this nightmare and how the hell we were going to get ourselves out.

And so, I became obsessed once again with Crossfire and its historical moment.

As an historian I can’t help but see the parallels, however imperfect, between the agenda and tactics of Trump’s America and those of Nazi Germany, and I’ve been taken by the recent writings of historians like Timothy Snyder who’ve teased that out.

But there are other, equally chilling historical parallels right here in our own backyard. The years after World War II were a pivotal time in the United States. The vaunted unity of the war years had merely papered over long-simmering racial tensions and economic inequalities, and the vast, unprecedented carnage of the war itself profoundly challenged people’s faith in concepts like “progress” and “civilization” and fueled a profound national identity crisis. In the words of historian William S. Graebner, in The Age of Doubt: American Thought and Culture in the 1940s:

“Was the United States a bastion of isolationism, as it had been in 1940, or a committed imperial power, as the Truman Doctrine and the Marshall Plan seemed to demonstrate? Was the nation committed to Franklin D. Roosevelt’s New Deal welfare state – with its implied goal of economic security for all citizens – or was it, as the popularity of Ayn Rand’s novels suggested, a stronghold of free-enterprise capitalism and individual responsibility, given to entrepreneurship and risk taking? Were Americans the stable, rooted beings that appeared in Norman Rockwell’s paintings, or were they, as Oscar Handlin’s study of immigration claimed, “the uprooted”?*

What does it mean to be an American? Who’s out and who’s in? Who can you trust? Which side are you on?

Deja vu all over again, right?

For me, the story of Crossfire has been a powerful lens for parsing out the answers to those questions, for understanding the historical roots of the contemporary culture wars in the postwar politics of Americanism and un-Americanism.

The public response to Crossfire, whether by critics, preview audiences or the House Un-American Activities Committee, revealed deep fissures in postwar America, particularly around issues of identity and belonging, tolerance and prejudice – divisions that over the past seventy years have festered and poisoned our country, our culture and our national psyche in ways that now seem to be coming back to haunt us, with a vengeance.

I think we, as a nation, made some profoundly wrong choices in 1947, choices that led to loyalty oaths, smear campaigns, blacklists, and an empowered surveillance state directed against ordinary citizens, to Muslim bans and border walls and covert and overt campaigns of repression and oppression around race, gender, sexuality, class, and American identity and culture.

Trump’s America represents the return of the repressed. And those questions that dominated Cold War America have come back with a vengeance: Who can you trust? Which side are you on?

And now the stakes are even higher. Here’s to making different choices this time around.

Originally published on July 22, 2017 at www.creative-egghead.com

Retweet if you think Ted Cruz and Josh Hawley should resign immediately.

“...the opportunity here isn’t to persuade conservatives to like you through conciliatory language and milquetoast gestures, rather to enact the kinds of policies that would, in fact, make everyone’s lives, including Republicans’, better.”

My piece from yesterday about the path ahead for Democrats. https://www.thecut.com/2021/01/the-only-strategy-left-for-democrats.html

Cannot wait for this
@politicsProse
event! #peterhodavies interviewed by
@elizmccracken
on 1/8: https://politics-prose.com/event/book/pp-live-peter-ho-davies-lie-someone-told-you-about-yourself-elizabeth-mccracken The Welsh Girl is a #topten for me -- and his early mss advice was spot on. Perfect for new year's #inspiration! #amwriting #noir #HistoricalFiction

Barry Lopez: An Era of Emergencies is Upon Us and We Cannot Look Away https://lithub.com/barry-lopez-an-era-of-emergencies-is-upon-us-and-we-cannot-look-away/ via @lithub

Can every woman who sees this change their handles to reflect their credentials?

Have you read the latest?